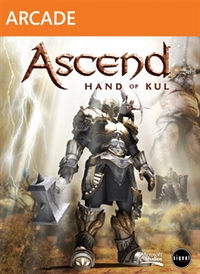 Ascend: Hand of Kul, initially titled Ascend: New Gods, was a free-to-play third-person action RPG created by Signal Studios. It officially ceased development on June 21, 2016 and is no longer available. The game followed the rise of the New Gods and their crusade to defeat the immortal and mindless Titans that dominated the world. Players fought as Caos in honor to their new gods that had arisen, each God fought for superiority over the other within the Crusade.