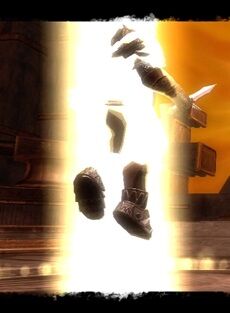 Ascension is a stage in your Caos's life where it dies and then returns to gain more power. Leaving your previous Caos form to fight in the crusade in the way you left it. If you choose to ascend you float up slowly in a light like shown in the picture to the right.

When to Ascend[edit | edit source]

You are able to start ascending at level 5, every time you ascend you increase your max level by 5. You can choose whether you wish to ascend when you reach the max level or as soon as the game allows you. The higher level you are the further you drop every Ascension.

Where to Ascend[edit | edit source]

You are able to ascend in the Crusade tab of your back menu at any time and place once you unlock the ability to ascend.

You get a level cap increase of 5, you gain an emblem, higher quality loot, change your alignment, and choose legacy items.

What Happens at Ascension[edit | edit source]

Once you choose to ascend, you enter the Vault of the Gods and you will find pedestals. These pedestals allow for you to legacy an item. Which means you get to keep the item with you after you finish ascending. The first center pedestal is free, the rest cost souls to unlock for that single ascension. They double in price every time you want to buy a new one(ex: 1,000Souls > 2,000Souls > 4,000Souls > 8,000Souls > etc.) Spells automatically count as legacy items when bought so there is no need to buy pillars for them. Every time you ascend you lose any none legacy items. So once you have chosen what items you want to legacy, sell the rest(ex: Runes, Armor, Weapons, and Crusade Spells) as you will be able to keep your souls with you that you still have.

Now you walk forward past the pedestals and you walk in to this little small pool. There you are stripped to just your dagger. This checkpoint is a point of no return after you legacy your items. Here your Caos separates from your to fight in the crusade.

Now you walk forward again and to the 3 statues of the New Gods, here you choose what alignment you want to be until your next ascension. Each God will offer their own rewards to tempt you into joining them. Joining an alignment other than your own will offer many benefits. These benefits include different kind of emblems and the ability to use their spells as well as your current God's spells. After choosing you can create your Caos, this gives you the chance to do any cosmetic changes to your Caos that you desire. Name your Caos afterwards and then choose armor and weapons like you did at the beginning of the game. Except now you may choose to wear your legacy items instead of the weak starter gear. After this you are launched back to where ever you were at when you chose to ascend.