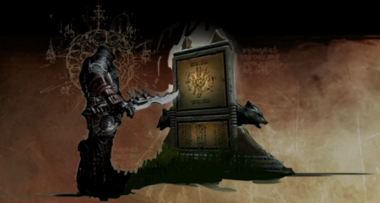 There is currently a total of 48 lore stones scattered through out the world of Ascend: Hand of Kul. Each Lore Stone tells information about the history, key figures, or features of Ascend. The player can see all collected Lore via a Codex Plaque found in the Sanctum.

"The Mighty Caos are the champions of the New Gods. They fight, die, and live again to serve their God in the eternal Crusade."

"The fathers of the Sanctus Brotherhood built this temple deep underground on the sacred soul pathways. Here, far from the Titan’s wrath, we remember the Gods of Dark, Light and Void, and preserve the rituals that summon the Caos."

"These walls are all that remain of the Crimhold, a once-great fortress destroyed by the Titan’s hordes. Like the noble men who raised its walls, it has long been reduced to ruins."

"Over the eons, the Caos have learned to carry their knowledge, and even their possessions, from life to life through Ascension. The dark angel of their soul has somehow transcended death, and therein become one of the most powerful forces to walk the world."

"The Caos are giants of towering strength, yet their divine birth allows them to channel the awesome power of their God into devastating spells."

"The bestial trolls are corrupt creatures, born from the blood and sorrow of the fallen. They infest this land like a plague, a constant reminder of the Titan’s dominion."

"The Crusade stretches across all worlds and all times. Each Caos is aware of other Caos in parallel worlds mirroring their own."

"The New Gods arose as the faith of mankind returned. Dominion is now their sustenance, for without the fear and prayer of humankind, they fade into dream."

"Men learned to worship the Titan, raising crude stone pillar on the old sacred sites. There they performed blood sacrifices to appease him and his troll children."

"The First Race littered the world with great doorways and secret chambers. Their titanic dungeons honeycomb the stone beneath the mountains, holding plunder and doom."

"Of all living things, only the Caos can Ascend, dying in one world and rising in another. Each Ascended Champion becomes a warrior in the Crusade, an endless conflict between the Gods and the countless dimensions."

The Hand of Kul[edit | edit source]

Location: Valley of the Pilgrims

"In ages past, this mysterious rock formation was sacred to Great Kul the Hunter, and the first tribes worshipped him there. It has long since been defiled by the blood of countless slaves offered in sacrifice to the Titan."

"Great Kul the Hunter was accompanied on every hunt by the four Apex, his sacred wolf companions: the Shadow, the Stalker, the Seer, and the Slayer. Mighty and cunning hunters, they ensured that no prey escaped his grasp."

"In the first days, the hill men were as wild animals and comingled with them. But the Great God Kul appeared and taught them the ways of the hunt, and raised them to be lord among the beasts."

Wisdom of the Wolf[edit | edit source]

"The Apex, the four Great Wolves of Kul, taught our fathers their wisdom. Like the wolf, men hunted together in packs, learning to kill for food and protection of the people. Thus the first tribes were born."

"Degenerate cults of humans worship the Titan, who they call Blood Eater. They enslave and sacrifice their brothers to sate the Titan’s ravenous appetite in the hopes that they themselves will not be devoured."

"All Caos are linked to an Ascended soul. It is the being within the being, an ageless life force that carries knowledge and power from life to life, growing ever toward Transcendence: the mastery of all three Gods"

"Where the blood goes deep into the earth, where the souls of fallen warriors sleep, the savage Berserkers are born. Red of skin and drunk on the blood of the slain, they attack with sudden and vicious ferocity."

"The youngest of the litter born to Kowraifa the She-Wolf, Dakrum gloried in stealth and the hidden kill. Men called him the Shadow and still fear his prowling spirit."

"These hideous mountains of flesh and muscle are centuries old, children of the Titan when he was new. Legends say it is they who devoured the once-great beasts of the hills and plains, where now there are only bones."

Tombs of the Apex[edit | edit source]

"When the Titan came, the Spirit World was torn asunder, and Kul no longer walked with his people. One by one the Apex died, and the faithful interred their remains in great tombs. It is said their spirits still haunt these lands."

"Trolls spawn beneath the ground in places of great turmoil and blood, gestating from the tormented souls of the murdered dead. Cursed is the day they boiled up to hunt the flesh of men."

"The trees of the Wildlands are said to be one organism, linked for miles by subterranean mazes of root and stone. At the center of this titanic entity stands the Tomb Tree, resting place of the Stalker."

God of the Void[edit | edit source]

"The God of the Void, the Trickster, is a being from beyond time. Few comprehend his origin or motive, and those who do have gone mad, dwelling forever in a twilight of cold with no end."

"Kadin, the third cub of Kowraifa the She-Wolf, was the consummate tracker, who would unerringly find any path and follow any scent. When the hunt began, Kadin led the way."

The God of Light[edit | edit source]

"The God of Light, Hammer of Law, He who makes of the world his Anvil, is a terrible but just master. A great Thunderbird is his messenger, and a bolt of lightning his voice."

"The ogres of the wood became cunning. Twisted by Witch Doctor blood magic, the Ogre Savages learned to hunt with spears and stalk their prey. Beware, for their size belies their quickness and trickery."

The Goddess of Darkness[edit | edit source]

"The Goddess of Darkness is a being of terrible beauty, whispering to Her acolytes of fury and fear. Hers is a realm of agony and annihilation, and She takes pleasure only in the doom of all."

Location: Glade of the Stalker

"When Caos were first made, Vor the Forgemaster bound their weapons with runic symbols. The ancient markings writhed with strange magic, giving untold powers to those who wielded them."

"In the first days, the Old Gods took form and walked among the people. Great Kul strode into the hills and forests of the Highlands, where the tribes built mighty towers and multiplied under his watchful gaze."

"Our elders whisper of a tower among the lakes, the once-great throne of an ancient king, now a place of great evil. Gray-eyed men come from there, speaking blasphemies, and the men they take with them are never seen again."

"Such was the faith of men that the Old Gods returned again and again to their people, to great joy. Great festivals were held on their visit, and the land overflowed with the multitude of plenty."

"Like his wolf-mother, Orveus was born with the Sight. His vision pierced the veils between worlds and beyond, to what was becoming and might be. It is said Orveus taught magic to the first tribes, but this knowledge has been lost to time."

"Each time the Old gods returned to the world, they fell further in love with pleasure and power. Soon they began to fight for ever greater harvests of souls and blood, the sacrifice of which they found to have no equal. The Gods had discovered war."

"Human blood woke a thirst in the Old Gods that they could not quench. Great sacrifices were made to sate their terrible hunger, but their appetites were never appeased."

Age of the Titans[edit | edit source]

"The day came when the Old Gods, drunk on human blood and redolent with slaughter, could not return to the Spirit World. Immortal but without grace, they went mad, becoming vast and mindless beasts of war. They set upon each other in rage, and the mountains trembled."

The Fall of Kul[edit | edit source]

"Great Kul the Hunter had fought with the Gods and had drunk deeply of the blood of man. The Apex fled, and Kul, his corrupted form twisted and fallen, was God no longer. In his place, the Titan was made manifest. Bestial trolls spawned from his black blood and cast the towers of men to the ground."

The Temple of Kul[edit | edit source]

"The Temple of Kul is the height of mankind’s skill with stone and mortar. Its grandeur conceals a grisly utility, for there were put to the sword countless innocents."

"Not all trolls are ravenous beasts. Those born with the fury of fallen soldiers become Warriors, elite troll fighters skilled with the blade. Their singular intelligence desires only to slay their enemies in a silver dance of blood."

"Magnar the Alpha-born was the first of the Apex to stand at Kul’s side and the strongest of his brothers. Humans worship him as Death incarnate, for the slaughter that issued from his teeth and claws was unequaled."

"Legend has forgotten how these tablets came to be cut. The Age of Scholars is long past, and only records cut in stone remain."

"Ours is a world of death, but we remember those who have passed before us. The stones honor our ancestors, and give comfort to their lost spirits."

"Our ancestors interred the sacred relics and weapons in great stone chests, holding faith that the Caos would one day return."

"Taken by the passions of the flesh, the Old Ones consumed all the acquisitions of men. And when men could no longer sustain them, the giants turned against them and devoured mankind. And they began to devour one another’s flesh, and drink the blood, and became beasts."

"The Old Gods taught the first tribes how to summon the Caos, great engines of physical might and divine power. Seeing their glory, the Old Gods desired to walk in flesh themselves. When the Titans came, the Caos were lost, their memory hidden deep beneath the earth."

Ghost of the Apex[edit | edit source]

"The four great wolves of Kul hold vigil for his return. From the Spirit World their souls wait and watch over the world of men."

"The Hand of Kul contains the last link between Kul and the Spirit World. Guarded by the Apex, it ensures that Kul’s Titan form remains immortal."

The Return of Kul[edit | edit source]

"But the Age of Kul will come again. In the final days, the Apex will return, and Great Kul the Hunter will raise us up forever."